The following article was originally posted by alumni Chris Dollenmeyer, MPT (2004) on a blog dedicated to the 75th anniversary of the Program in Physical Therapy at Saint Louis University in September of 2008. It’s always good to review a little bit of SLU PT History! 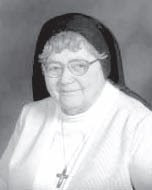 A Bit of SLU PT History
In 1940, Sr. Mary Bernard Gruba, O.S.F. became the second graduate of SLU's Physical Therapy program. She was also previously certified as an X-Ray Technician and Laboratory Technician. Her ministry as a physical therapist took her to Liberty, Texas; North Platte, Nebraska; and Stuebenville, Ohio. She then returned to Sylvania, Ohio, where she continued working as a PT for her fellow Sisters of St. Francis. Sr. Bernard's work as a therapist spanned nearly 60 years. She died at the age of 99 in 2008.
at 9:36 AM