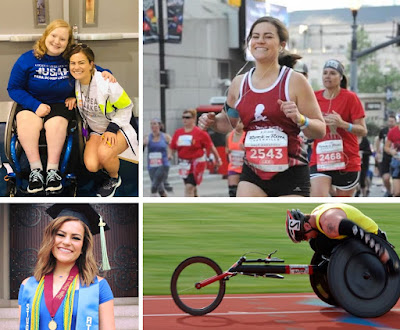 “GLASA helps athletes like Laura continue to pressure her athletic spirit,” states SLU SPT Alexis Ardovitch who volunteered at the games held from June 13 - June 16 at Lake Forest High School and Niles West High School, just outside of Chicago. Laura had been an avid biker with an active lifestyle before her accident. Now she is a powerful badminton player, beating Ardovitch on the court in an off the records game last month.

Ardovitch, who is a 2018 SLUPSY Billiken Student-Athlete award winner, plans to run the Chicago Marathon in support of her fellow athletes on Sunday, October 13, 2019 in Chicago Illinois. "I am choosing to run the Chicago Marathon for GLASA because I am inspired by the athletes and their stories," writes Ardovitch. If you would like to be a part of her journey to increase access and raise awareness, then consider donating to Ardovitch's marathon HERE.

With events like the National Veterans Wheelchair Games and the Midwest Valor Games, GLASA strives to create opportunities for empowerment, specifically surrounding disabled veterans. Reflecting upon the image above Ardovitch remarks, “Babette and Johnnie were both so full of joy. Both have served our country. Thank you for your service!”

At GLASA, Ardovitch made the acquaintance of key figures creating access and opportunity for independence, such as Oluwaferanmi Okanlami, MD, MS. Dr. Okanlami creates programs for disabled college students at the University of Michigan, where he is Assistant Professor of Family Medicine and Physical Medicine & Rehabilitation. Affectionately known as “Dr. O,” he is also Director for Medical Student Success in the Office for Health Equity and Inclusion.

GLASA's motto, 'Let No One Sit on the Sidelines' inspires an atmosphere of inclusion and well-being. The Association sponsors recreation, exercise and elite level competitive sports activities for over 3,000 youth, adult and military veterans with disabilities from around the world. Please consider supporting GLASA by donating through Ardovitch's Chicago Marathon Campaign page HERE.
at 4:27 PM No comments:

SLU PT Students Recognized by the Foundation for Physical Therapy

Top fundraising schools, like Saint Louis University, were announced on June 13, 2019, at the Foundation’s Awards Luncheon held during the 2019 American Physical Therapy Association (APTA) NEXT Conference and Exposition in Chicago. Marquette University co-hosted the luncheon which was also sponsored by the American Council of Academic Physical Therapy (ACAPT).

Traveling to Chicago for the APTA(NEXT) Conference, SLU DPT Student Caroline Lipic was able to accept the award on behalf of all SLU PT students involved in the campaign. Pictured at top, Edelle Field-Fote, PT, PHD, FAPTA, Professor in the Department of Rehabilitation Medicine at Emory University School of Medicine bestows this distinguished award to SLU DPT student Caroline Lipic. Dr. Field-Fote is also President of the Foundation's Board of Trustees.

The Marquette Challenge unites PT & PTA students from across the country in a singular effort to raise money for the Foundation for Physical Therapy Research and their awardees. “There is a friendly competition between schools to see who can fundraise the most,” said McKayla Figueroa, SPT, a student coordinator for Marquette University. “But the most important thing is just to participate at any level. We’re all connected by a shared passion for helping people through physical therapy.”

The Foundation for Physical Therapy Research is a national, independent nonprofit organization conferring grants, scholarships, and fellowships to leading researchers in the field. For over 40 years the Foundation has relied on the donations of individuals and institutions to fund scientifically based and clinically relevant research initiatives. Their mission is to shape the future of healthcare through physical therapy research. Incorporated as a charitable organization in 1979, the Foundation has awarded more than $17 million in grants, fellowships, and scholarships to nearly 600 researchers. Learn more about the Foundation's investments in the physical therapy profession at www.foundation4pt.org.
Story by Kristin Hrasky
at 9:09 AM No comments: