Matt Johns shares his A 10 Experience 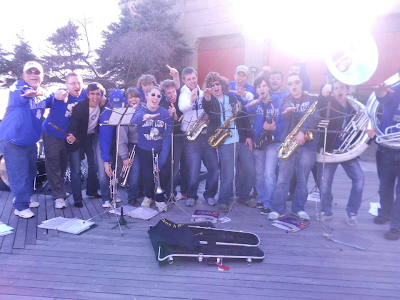 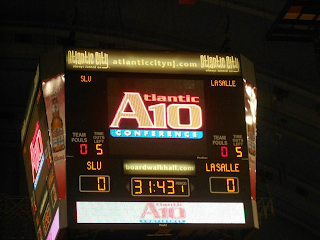 Summing up the amazing time we all had in Atlantic City with the band/Saintsation/basketball team is not an easy task.  From the moment our bus arrived I can honestly say that we didn't stop moving around for 72 straight hours.  Between the pregame lunch and dinners to beeboppin around the boardwalk outside it was non-stop action.  Not to mention the games, the whole reason we were truly there.  The environment in that arena was amazing for every game.  Our first match up against La Salle provided us with the sense that everyone wanted us long gone and back in St. Louis.  The constant cheers when La Salle got a controversial call.  The jeers and hushed crowd when Kwamain was knocking down shots left and right.  All of it was great.  It was kind of cool to be "that" team with the "X" on your back where everyone wants you gone.  Regardless of all of this, we prevailed and that night was phenomenal.  Everywhere you went with SLU apparel on you instantly became a local star.  Everyone starts asking you about the school and the team and they'll listen to anything you have to say.  Not to mention, running into any La Salle fans could have provoked an argument with nothing more than a glance. 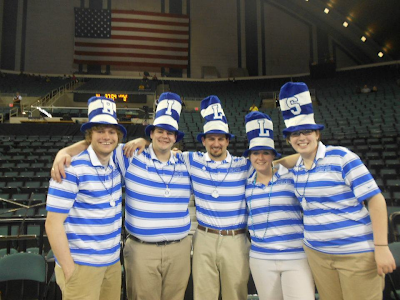 Day 2 was equally as exciting but this time the neutral court was much more "neutral."  As players from both teams came to the court you could tell that we were no longer the bad guys.  It was almost as if because Dayton lost to Xavier the previous day we had instantly gained a new, and large, fan base.  Students in UD gear were just as into SLU taking down Xavier as we were.  Sadly that game didn't turn out as we had hoped, but that night we learned a little more about post-season basketball: The second you lose to a team, you instantly form temporary bonds with the team facing whomever you lost to.  As if there were no A10 rivalries ever to be seen, we were out and about with Dayton and St. Bonaventure fans all with one goal in mind: cheer against Xavier until you were blue in the face....and this was awesome.


﻿Day 3 led to even more surprises.  We all had intentions of playing it low key, attending the championship game, and then returning to our hotel for a relaxing last day.  Boy, were we wrong about that. 30 minutes before the Xavier/St. Bonaventure tip off we got a notice that SBU wanted us to come play as their band.  Without hesitation there was an instant sense of "yes" and we were on our way into the arena with the Bonaventure student section.  Like I said, you make friends easily when you both have a common goal in mind...especially when this involves taking down Xavier.  The student section was rowdy, just as we had hoped.  The best part was that Bonaventure ended up doing what we had all hoped by winning an A10 title.  To add to the fun we decided to take our band outside to the boardwalk just behind our hotel and play a few songs to the passersby.  Rather than adding a little atmosphere to the area, we created an instant party!  After playing no more than 2 songs we had hundreds...yes hundreds...of St. Bonaventure/SLU/Dayton fans dancing and singing and clapping along and just having a blast knowing that they were in the tourney to come in just one week.  You can ask anyone in the band - this little 30 minutes of playing was probably the best time they've ever experienced as a part of the pep band.  After we decide to wind it down a bit we all begin to take little adventures around the rest of the boardwalk and head up to a local sports bar area to watch with the Saintsations where SLU will be placed in the tourney.  Needless to say we were all going nuts when we saw that number "9" next to our ever glorious Billiken logo.

Clearly there are hundreds upon hundreds of more details that could be added, but I think you get the point.  It was a trip we will never forget and I can only hope that this tradition continues on for years to come.  For now though, its tourney time and all that matters is rooting on our Bills!  Let's hope for an amazing run and some good basketball ahead! 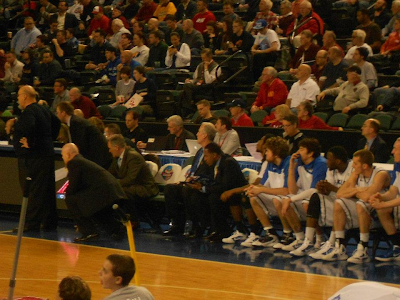