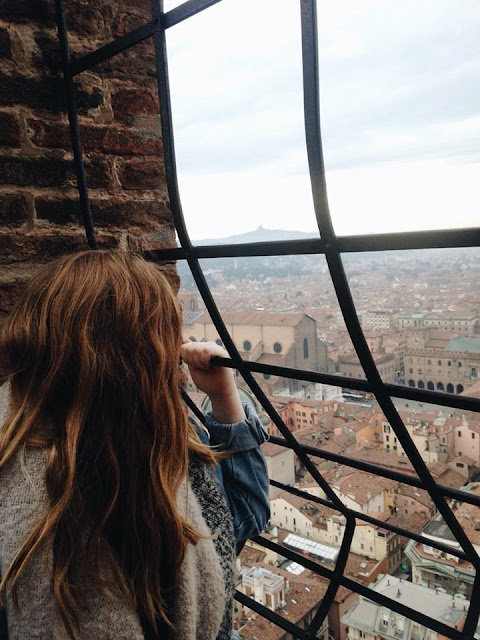 When I first told people that I was studying in Bologna, my response was most often a confused face paired with a puzzled, “Where’s that?” Not many people know where Bologna is located, or have even heard of this fantastic Italian city, which to me made it even more intriguing. I chose to study in Bologna particularly because I did not know much about it, and because I only knew of one other person studying there from SLU. Although there ended up being 5 SLU students going, I was urged to branch out of my comfort zone more than I believe I would have if I had chosen to study in Madrid, Rome, or Galway (which were my other competing options). I had travelled to Italy before on a 12-day excursion in high school, seeing many different cities and learning about the Italian culture. Although I had never been to Bologna, I wanted to go somewhere in Italy and a new city filled with new experiences sounded like a wonderful plan.

Bologna really threw me for a loop. I expected an Italian city much like the ones I visited before, like Florence and Rome. These cities are huge, filled with fashionable people and tourists, art on every corner, and fantastic architecture. Upon my arrival in Bologna, I quickly learned how different this city is from the idea I had envisioned. The city of Bologna is home to the World’s first university, the University of Bologna founded in 1088 AD. Bologna is a center of culture and learning, with over 100,000 students living in the city, which is why it is known as “La Dotta,” or “The Learned”.
The streets are full of life every night of the week, and each day every street and coffee shop is stuffed with students and young adults. Additionally, Bologna is known as the “La Rossa” or “The Red” because of its characteristic medieval architecture crafted from red bricks. Many of the medieval buildings, cathedrals, and basilicas are filled with medieval art and sculpture. The center of the city is largely the original architecture from the medieval ages, with draw bridges and iron gates, adding a whimsical feature to my walk to class.
Some of the unique features to my semester in Bologna are the program’s initiative for immersing American students in the Italian culture, as well as learning about some Italian politics. The Spring Hill College Bologna Center arranges for students to live in the Camplus Alma Mater dorm with approximately 100 other Italian students. American students also have the opportunity to apply to live in an apartment within a Jesuit Residence closer to the center of the city.
I lived in the dorm with one random roommate. Her name was Emily, and she was from Spring Hill College in Alabama, and we quickly became best friends. Living in such close proximity to Italians was an awesome way to keep up with speaking the Italian language, and even allowed us to have some personal tour guides of the city, leading us to some of the best Italian Cuisine, why Bologna is also known as “La Grassa” or “The Fat.”

Social justice was the main focus of our semester abroad, where the Spring Hill College program arranges for two trips around Europe with this focus. Our first 10-day trip, included in the tuition we paid for the semester, was to Syracuse in Sicily, and Valetta, in Malta. In Malta, we learned about the culture and heritage of this very small island country. As an island in the Mediterranean, they have an ongoing influx of migrants from Africa and the Middle East. Sicily faces similar migrant population influences, and we had the opportunity to spend time in a migrant boys’ camp for minors. We played soccer with the boys, and learned about their situations and circumstances of fleeing their countries.
The second trip was optional, and we went to 5 cities in Poland over our fall break. We learned about the Solidarity movement in Poland during the time of WWII and the Cold War, and visited Auschwitz-Birkenau concentration camp just outside of Krakow, a very moving experience.

During other weekends, I travelled to many different countries and cities in Italy. Bologna is very easy and inexpensive to travel from with its airport in this central European location and major Italian train station. Some of the most remarkable places I visited were Salzburg and Vienna in Austria, and Split in Croatia.
Croatia is a beautiful country with mountains and ancient Roman influences scattered around the coast of the Mediterranean. Austria is a country from a fairytale book, home to many famous castles and composers, such as Wolfgang Amadeus Mozart. However, I have to say my most favorite experience was Munich, Germany.
I met up with some friends who were studying in Madrid for the annual Oktoberfest celebration. Although I lost my phone on the metro, I had no complaints about the city, and the German cuisine reminded me of me home in Milwaukee, Wisconsin.
All-in-all, Bologna is a hidden gem in the northern mountains of Italy, from the amazing Italian cuisine to the beautiful architecture, I will always feel that this city is a small part of home to me. I miss it every day and I cannot wait for my next opportunity to visit Bologna: La Dotta, La Grassa, e La Rossa!