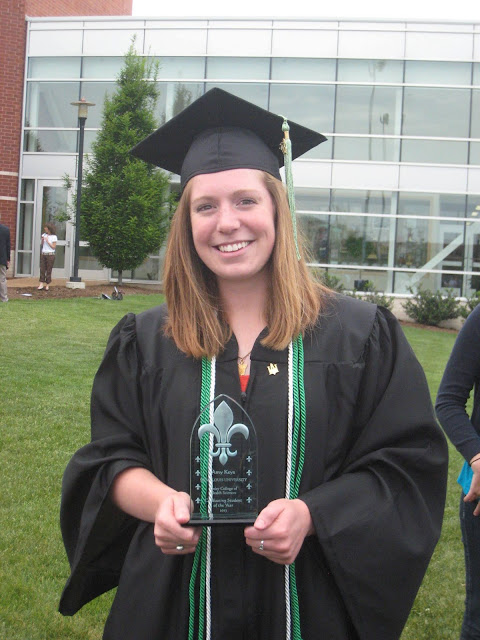 Saint Louis University Program in Physical Therapy student Amy Keys (Class of 2015) was named Outstanding Undergraduate Student of the Year by the Doisy College of Health Sciences Alumni Board. Amy was born and raised in St. Louis. Maureen and Rich Keys, Amy’s mother and father, met their freshman year at Saint Louis University. All of Amy’s siblings attended SLU, including her sister, Margaret Keys, who graduated with her DPT from the Program in Physical Therapy in 2010.

A large part of Amy’s involvement at SLU has been with the Micah House Program, which focuses on faith, service, social justice, and community. Amy was a Micah Mentor and served on a leadership committee for the Micah House Program. She went on a Spring Breakout mission trip to Navajo Nation and has been involved in SLUCORE, Oriflamme, Relay For Life Steering Committee, and SLU Club Softball. Amy helped with College Church’s youth group and attended multiple SLU Campus Ministry retreats. Amy was a member of Alpha Sigma Nu, Alpha Eta Honor Society, and NSCS. She was on the Dean’s List each year. During Amy’s freshman and sophomore years she worked as an Athletic Trainer Assistant with SLU’s Division 1 Athletic Trainers.