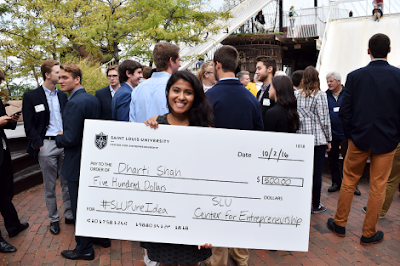 I entered a contest called SLU Pure Idea Generator back in September. This is hosted through the Center for Entrepreneurship. To enter, competitors had to tweet a solution to this scenario: "Pokemon Go combined augmented reality & geolocation to create the hottest game of the summer. Combining 2 technologies, what would you create to make the next big thing?"

The contest received over 150 submissions. And from those submissions, 24 participants were selected to compete. I was actually chosen as an alternate initially! When another participant dropped out of the competition, I was asked to be a finalist! The competition drew competitors from all around the Midwest, including schools such as: Iowa State University, Milliken University, and Purdue University.
On October 2nd, 2016, the 24 competitors gathered at City Museum’s rooftop. Our challenge was to come up with a solution to a prompt while taking a 20-minute ride on Big Eli, a 30 ft tall ferris wheel on top of the building. At the end of the 20 minutes, competitors would pitch their solution in one minute to a panel of judges. The competitors were allowed to bring a “brainstorm buddy” with them to bounce ideas with. I actually didn’t end up having a brainstorm buddy, I felt like given the time constraints, it might be difficult to come up with an idea that was mutually agreed upon. Dr. Mike Markee from the Athletic Training Program showed his support at the competition and came to cheer me on! It was through Dr. Markee’s class that I was told about the contest to begin with.

The prompt we were given as we walked onto the Ferris Wheel asked us to come up with an incentive program to attract and retain more students in the St. Louis area. The solution I came up with was a program called Mission STL: Sustainability. Training. Leadership. This program would allow students to be matched with the city’s best educators, health care professionals, entrepreneurs, engineers, and lawyers—any area of interest that the student wanted! They would complete a one-year intensive program for intensive skills and leadership training specific to that field of interest under the mentorship of their advisor. By generating exposure to their fields and becoming more integrated in those professional networks, students could create leadership opportunities to further their growth. As students graduate the program, it would be required that they commit to being a mentor in St. Louis for one year to future students. This pay it forward philosophy best sums up it’s potential to be a sustainable program and give students opportunities of a lifetime. Pictured below is me brainstorming while on the Ferris Wheel—it went so fast!

To my utter shock, I was announced as the first place winner of this competition! I was awarded $500 and an all-expense paid trip to the National Conference for the Collegiate Entrepreneurs Organization (CEO) in Tampa, Florida at the end of October! I was so humbled and honored to be given that opportunity. I looked into the conference and discovered that they were hosting an Elevator Pitch competition, so I thought, “Why not?”, and entered!

There were over 250 proposals received for the CEO Elevator Pitch contest. I was among 61 students chosen to compete! I created a hypothetical product called EchoMicro, which was an audio amplification product. I came to find out that many of my competitors had real businesses that were generating revenue or ideas that were in very late stages of development, it was so intimidating! The contest was split into 6 heats, there were 3 heats for a track that was for ideas and non-revenue generating businesses, and 3 heats for established products/businesses that were generating revenue. I was in the first track. There were 12 other participants in my heat. Two of those 10 competitors would move onto the next round, semifinals! To my surprise, I was chosen from that group to move on! It was really encouraging to have so much feedback and the support of the SLU students that were there attending the conference.

The semifinals comprised of 12 individuals, 6 from each of the aforementioned tracks. While I did not move onto the final round, it was so incredible to be among this group and at this level of the competition. I learned a lot from the conference itself, and it was a great networking opportunity to meet students from other universities and entrepreneurs that have found huge success. I was connected with a lot of people who could have a huge impact on my life and be great resources down the road!

In early November, I heard about SLU’s 5th Annual Real Elevator Pitch Competition. I decided to put myself out there and just go for it again! They were accepting 30 second videos that pitched products/companies that were in one of two tracks: Nonprofit/Social Impact and For Profit. I entered submissions for both tracks—my for profit idea was the same product, EchoMicro, that I pitched at the conference in Tampa and my nonprofit/social impact idea was for a hypothetical health and wellness app called All is WELLness. I found out that All is WELLness was accepted, and once again opportunity knocked!
On December 4th, 2016, 24 competitors came to the Metropolitan building in downtown St. Louis in which we would pitch our idea 12 separate times in real elevators. There were 3 banks of elevators, all of which operated at different speeds. The total length for the rides was about 40-45 seconds, this was consistent for all the banks of elevators.

How the competition was set up was that there was were about 30 judges total they would be split into the 12 elevators. Each judge was given 8 business cards total. They were instructed that they could offer 6 business cards to any of the competitors immediately after hearing their pitch. The last 2 business cards could be handed out at the end of the round after they had the opportunity to listen to all 12 pitches in that track. There were no stipulations on how many cards the judges could hand out per competitor. The top three competitors in each track with the most business cards would then do one final pitch to two VIP judges in a Tesla ride around the block.

The competitors were split into their different tracks, and began this fast paced process! The 12 competitors in my track each took 12 elevator rides and did 12 pitches in the matter of 15 minutes. In each elevator were 1-2 judges who were deciding if our pitches would “WOW” them in a real life setting. This was a tough process, it went so fast! If you had any mis-steps with your pitch, you couldn’t dwell on it, because immediately when the elevator doors opened you had to step into the next elevator and start fresh to a new set of judges. I happened to be put in the bank of elevators that went the fastest in my first round, my ears popped on every ride and I couldn’t even hear what I was saying! The final two banks were must easier after that.

After the 12 pitches in the elevators and after the judges had the opportunity to hand out their final two cards, we gave over the business cards we collected for them to be counted. If I had to throw out a number, I think I collected about 17 business cards total.
They announced the top 3 in alphabetical order, and again to my disbelief, I was in that top 3! I was joined by Caleigh Bemont from the University of Iowa (right) and Erin Dabbs (center) from the University of Nebraska-Omaha. We each took our Tesla rides individually and gave our pitches one last time. The VIP judges had a combined net worth of 1.4 billion dollars. This ride around the block was a little longer, so the judges had the opportunity to ask us questions for clarification. After listening to all three pitches, they determined the ranking for the prizes. This happened for the top 3 competitors in both tracks.

I ended up taking 2nd place in the Nonprofit/Social Impact track! I was awarded $1,500! What I was even more excited to see was that 5 of the 6 winners (top 3 from each track) were women!

All in all, this semester has been one of challenges and growth, but I’m happy that I found the courage to put myself out there! These opportunities have opened a lot of doors and have really helped me develop professionally in so many ways. I viewed these opportunities as a way from me to work on my communication skills and presence while speaking to others. The thing that I will take away from these contests was the opportunity to learn and have fun—and that to me is more valuable than any money!

You can learn more about these events on the website for the Center for Entrepreneurship.
at 9:14 AM