Are there fun things to do in the city of St. Louis as a PT student? Sure!

Annie Mroz, a current senior in the Program in Physical Therapy at Saint Louis University, responded to this inquiry with a lot of enthusiasm about Stray Rescue. Annie often spends time walking and training some pretty cute pups (see photos below!) which not only gives her a break from studying, but improves the lives of her 4 legged friends and makes an impact on the city. Read about Annie's experience with Stray Rescue St. Louis below! 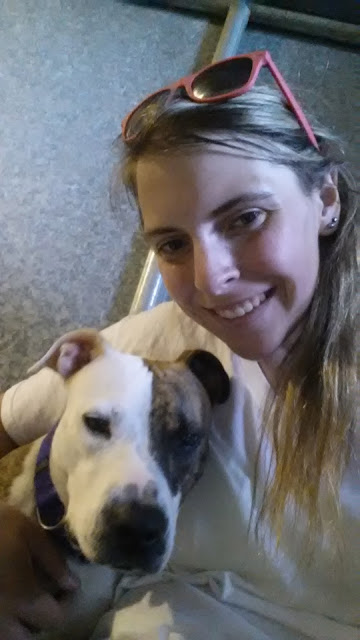 I work with Stray Rescue of St. Louis, a no-kill shelter that rescues stray and abused dogs in the St. Louis Metropolitan Area. A friend of mine encouraged me to become a volunteer at Stray Rescue at the beginning of the summer when I needed something productive to do during my first summer in St. Louis besides studying Gross Anatomy.

After attending the orientation session, I have become a highly active volunteer. When I first started volunteering, I just walked dogs during the morning or evening shift to get them out of their apartments so that the enclosures could be cleaned and the dogs could go to the bathroom. Now, I volunteer as a Rehabilitation Enrichment Program (REP) member. As part of the REP, I work specifically with one dog for about a month, taking that dog on hikes/lunch outings and improving upon some of the dog's issues. Even now that I am a REP member I still help with some of the regular shifts. I practically go every day! It is such a great stress reliever!

The most rewarding aspect of working with the dogs at Stray Rescue is that I get to make a difference in the dogs' lives, other volunteers' lives that I talk with, and the families that adopt these wonderful animals. I encourage all my friends or anyone that loves dogs and wants to do something for the community to come and at least check out Stray Rescue because it is an amazing, unforgettable experience every time. For those that want to get involved with Stray Rescue visit their site at http://www.strayrescue.org/. 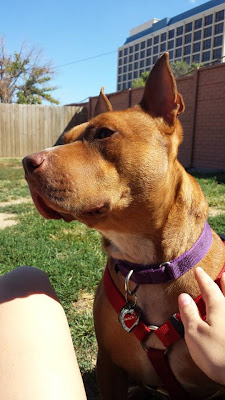 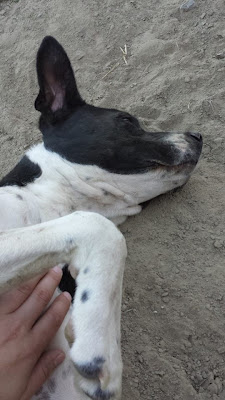 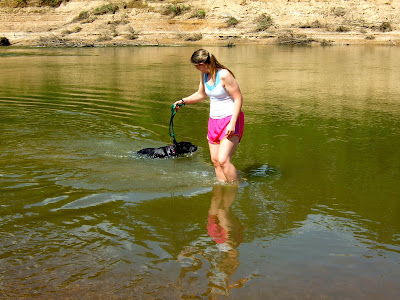 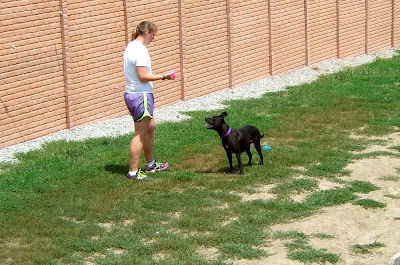 The Program in Physical Therapy was featured in Newslink today! See article below:

Chris Sebelski
314-977-8724
csebelsk@slu.edu
Physical Therapy to Offer Work Station Assessments
Sixth-year students in the Program for Physical Therapy will analyze the ergonomics of faculty and staff work stations as part of their required course work.
Physical Therapy students in the sixth and final year of their program are in need of faculty and staff volunteers to participate in an individualized ergonomic and work station set-up assessment sessions.
The students, as part of their course work, are required to assess the ergonomics and work station set ups within the Saint Louis University community for application of curricular content and to improve communication skills.
All sessions will occur at the volunteer's work station and will require a picture of the volunteer at the work station for the purpose of reviewing the student's work. Each assessment session will last approximately 30 minutes. The sessions will occur between Monday, Oct. 7, and Thursday, Nov. 7.
Volunteers must be willing to participate in a single appointment, which will be individually arranged with the assigned physical therapy students. This appointment will happen at the volunteer's work station. During this time, the student will request information regarding the volunteer's daily tasks at the work station and the time spent at each task.
Those interested in assisting the students in the Program in Physical Therapy develop their assessment skills while receiving feedback on their individual work station set up should call or email the course coordinator, Chris Sebelski, DPT, in the Department of Physical Therapy and Athletic Training at csebelsk@slu.edu or at 314-977-8724.
at 8:00 AM No comments: 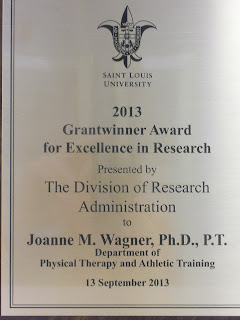 Congratulations to Saint Louis University Program in Physical Therapy faculty member Joanne Wagner on receiving an Excellence in Research Award from the University!
at 12:40 PM No comments: 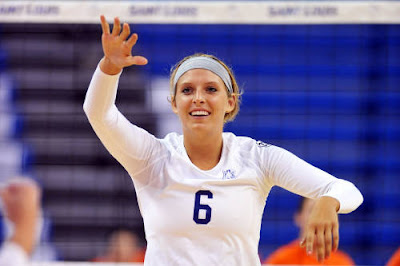 Congratulations to SLU PT student Megan Gilbert on being named the Atlantic 10 Volleyball Defensive Player of the Week! This is Gilbert’s first weekly award of the season and the second for the Billikens this year. Find out more about Gilbert’s impressive defense here.
at 8:07 AM No comments:

Sarah Lohmann is a graduate of Saint Louis University’s Program in Physical Therapy (DPT Class of 2012). Sarah recently graduated from Harris Health’s Orthopedic Residency Program in Houston, Texas. You can find Harris Health’s bio on Sarah and Sarah’s response to her residency experience below. The Program in Physical Therapy at Saint Louis University is very proud to call Sarah an alumni and wishes her the best in pursuing a Manual Therapy Fellowship this year.

Sarah Lohmann attended Saint Louis University in the freshman-entry Program in Physical Therapy. During her undergraduate years, she was a contributing member of the Saint Louis University Division 1 Field Hockey Team.  She graduated in 2010 with a BS in Exercise Science, with a minor in Theology. In 2012, she graduated with her Doctor of Physical Therapy (DPT) degree. Sarah worked for Harris Health System as a Physical Therapist in the acute setting before transitioning into the Orthopedic Residency. This summer she spent a week volunteering her skills and time in Nicaragua on a medical mission trip.  Upon completion of the residency, Sarah will stay on at Harris Health as an outpatient Physical Therapist. Her future plans include becoming an Orthopedic Clinical Specialist and completing an Orthopedic Manual Physical Therapy Fellowship.

The Harris Health residency program was the first of its kind in Texas and is one of a handful of residencies operated by public healthcare systems in the U.S. The residency is a year-long program that incorporates intense classroom and clinical training along with mentorship in the hands-on care of patients by expert physical therapists in the Harris Health hospitals and health centers. The organization now operates two physical therapy residencies — orthopedic and neurological. 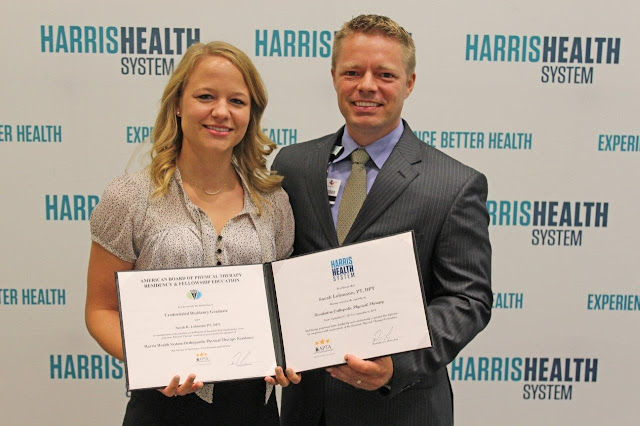 Sarah’s Response to Her Residency Experience

When I was about to begin my second professional year, I started to consider residency training. I knew I was interested in Orthopedics and I wanted more learning and mentorship experience. I began to research residencies around the country. I also attended the National Student Conclave to explore different residencies that would be represented at their fair. With the help of my mentor, Tricia Austin, and program director, Mark Reinking, I slowly started to create my resume and get my applications submitted.

I was accepted into Harris Health System’s Orthopedic Residency out of my home town, Houston, Texas. The program is very unique, in that it includes a large component of manual therapy. I was the first Saint Louis University alumni in the program. Now I am proud to say that James Heafner (PT Alumni, DPT Class of 2013) is the second SLU alumni to attend our residency.

During my residency experience, I received over 160 hours of one-on-one mentorship and over 200 hours of didactic training. I was exposed to many different patient diagnoses which allowed to me to diversify my practice. In this past year, the residency has helped me transition from new graduate to expert clinician.

I will be sitting for my Orthopedic Specialist Certification Exam in March of 2014. Soon after the exam, I will start a Manual Therapy Fellowship.

I am so grateful for the help and encouragement I received at SLU to pursue my goal of enrolling in a residency. I would not trade this experience for anything.

From Madrid, With Love!

See our photos of SLU PT Juniors in Madrid below! SLU PT students have the opportunity to study abroad the fall semester of their junior year. That means one whole semester in some exotic place like Spain, Rome, Thailand, or Australia! Check out the SLU website Study Abroad page for a list of places SLU students can study abroad. 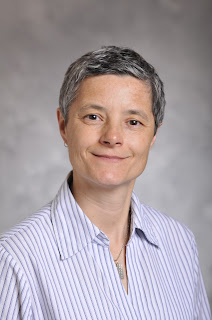 Program in Physical Therapy faculty member Joanne Wagner made a commentary for the Multiple Sclerosis Monitor and Commentary. View the whole issue here.
at 9:36 AM No comments:

On July 11, 2013, SLU Program in Physical Therapy faculty member, Chris Sebelski, became a Fellow by graduating from the Education Leadership Institute (ELI) Fellowship.  She was one of fourteen ELI Fellows who completed the yearlong higher education leadership program that consisted of: modules provided by nonphysical therapy content expert faculty, face-to-face mentorship and administrative mentorship sessions, and completion of an institution-based leadership project. Dr. Sebelski's leadership project included a feasibility and planning process for development of a post-professional physical therapy residency in orthopedics.

Sebelski stated, "It was such an honor to be able to participate in the Fellowship.  It was an experience that was beyond compare for the opportunity and interactions with established and emerging leaders in the profession of physical therapy.  The relationships and friendships from ELI will last throughout my career."

SLU PT students Rebecca Graue (Class of 2014) and Allie Kostes (Class of 2015) also participated in the event on a different team.
at 11:43 AM No comments: 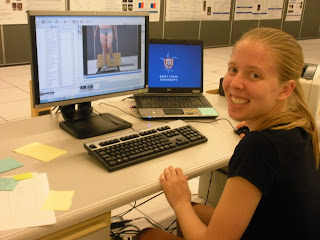 Saint Louis University’s Program in Physical Therapy provides research opportunities for students who are interested. PT student Leah Fischer (Class of 2016) is pursuing such an opportunity as a research assistant. We asked Leah exactly what kind of research she does for the Program in Physical Therapy, why she became interested in PT research, and how it relates to what she is learning in her labs and classes.

Since I had a strong desire to broaden my exposure to the study of physical therapy and gain experience outside the classroom, I pursued a research assistant opportunity related to patellofemoral pain in females. I work in the motion capture lab with Program in Physical Therapy professor Dr. Gretchen Salsich and assistant professor Dr. Sara Scholtes using Dartfish, a 2D motion analysis software program. I import videos of females performing various movements and tasks such as a single leg squat or walking down stairs. Then I pause the videos at specified intervals and take measurements of angles related to the knee, hip, and ankle. The final step of this research involves analyzing and graphing the data using a statistical software program to evaluate the changes in movement.

This research project has given me the opportunity to apply what I have learned in Kinesiology, which is the study of movement. Through this research, I am able to study the movement of subjects with and without patellofemoral pain. This research has given me a better appreciation of the internal and external forces required to perform specific tasks correctly. While viewing the videos and measuring motion, I have gained a deeper understanding of how people move and the impact of those movements on their bodies and joints. This opportunity has given me greater insight into the importance of research in the physical therapy profession.